Annette Watt recently told me a lovely story about her 91-year-old mom’s quest for a specific almost extinct variety of orange for her marmalade.

Along with gardening, Franci Muller’s great passion is making preserves. Starting in Zimbabwe where she was born, and now in Caledon in the Western Cape, wherever Franci has lived, she has always had a variety of fruit trees – but not an orange tree. The Rex Union is the only orange she will use in her marmalade, and no other orange tree will do in her garden!

This determined lady contacted and visited citrus farmers all around the country in search of the elusive fruit and, even better, a tree. One farmer she tracked down in Kirkwood in the Eastern Cape, would courier about 12 oranges at a time to Caledon, which she used to make enough marmalade to last about two years. Meanwhile, the hunt for the trees became something of an obsession.

Thanks to Google, Franci eventually found out that there were still a few trees on the very farm near Rustenburg in North West Province where George Wellington Rex (who introduced many citrus varieties to South Africa) grafted the first plants. Until recently, the original orchard of around 250 trees was the only place where Rex Unions were still being grown, and the owners have kept it going and planted new ones. An opportune trip to the Pilanesberg was of course combined with a visit, and a very happy “Oumie” returned to Caledon, not only with fruit for her next batch of marmalade, but also a few cuttings to cultivate and plant for her own use. At last, the orchard is complete! Franci clearly lives by the maxim that the best time to plant a tree was 20 years ago; the second best time is now.

Intrigued, I did a little research of my own and found out that the Rex Union orange is the result of a cross between a sweet orange and a pomelo, and was an ingredient in many early 20th Century recipes. I daresay there is a dusty old book of hand-written kitchen notes in many a South African family which include the “secret” to the perfect marmalade.

We are most excited that we now have dragonflies in the garden and nursery.  With all our “au naturel” ponds, I’m amazed that they have taken so long to move in!  We also have a flock of Bronze mannikins in the nursery; I feel as though I have walked into an aviary when I enter the nursery.

It’s the time of year that reminds us to let go while always looking ahead. The seasonal plectranthus, crocosmias and Japanese anemones make way for glorious autumn foliage, seeds and berries, and the budding of perennials like the winter flowering salvias promise us that there is always something to enjoy in the garden. 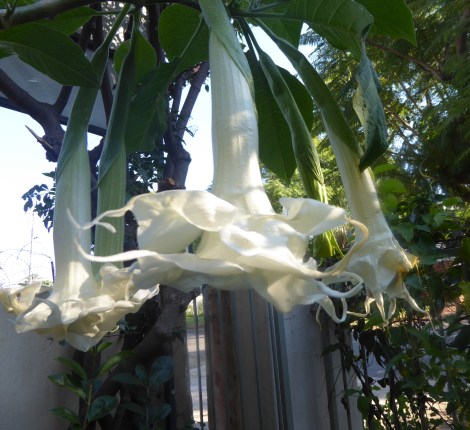 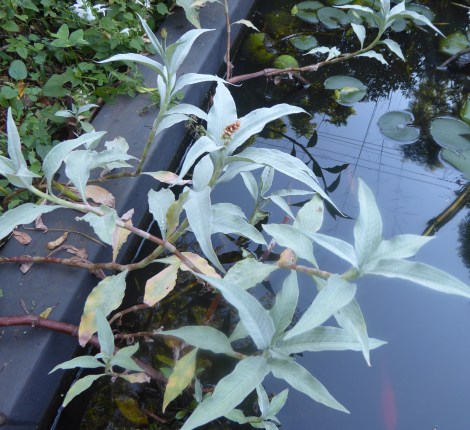 Persicaria senegalensis thriving in one of the ponds 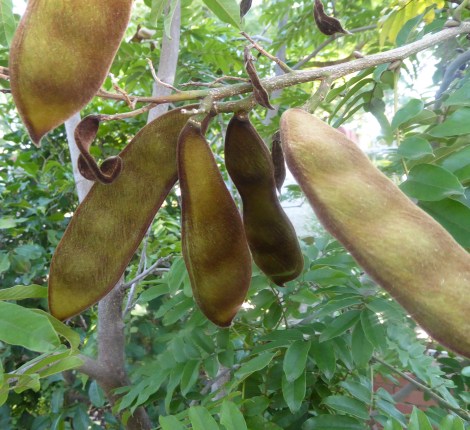 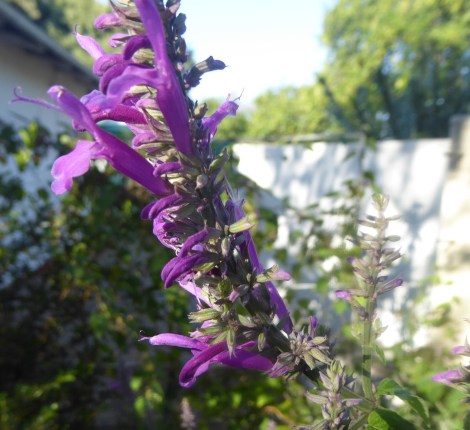 The upright woody perennial Dyschoriste fischeri likes those very hot spots in the garden but can also take semi-shade. Evergreen and hardy, this shrublet grows about 60cm high and has lovely turquoise or mauvey-blue flowers all season.

The true blue flower sprays of Plectranthus hereroensis are a real treat in autumn. This robust upright shrub has succulent stems and pale green leaves, and is happy in sun or semi-shade. Evergreen and hardy, it does best when cut back hard in spring and summer. It reaches an average height of 1.5m.

Psychotria capensis is a gorgeous indigenous shrub or small tree with large glossy green leaves and flat clusters of golden yellow flowers in spring to summer, followed by beautiful Yellow fruit. Birds and bees love it. Evergreen and semi-hardy, it wants moist soil and shade to semi-shade.

Another plant that likes moist conditions and shade to deep shade is Selaginella kraussiana, a tough, 5cm high groundcover with prostrate stems and fernlike foliage. We have them in green and lime green. One of the best groundcovers in my garden but it also makes a good indoor plant.

Hydrangea quercifolia is a 1.5m high deciduous shrub with conical heads of creamy white flowers from spring to summer, and large bold deeply lobed leaves that turn a rich bronze-red to purple in autumn. It is very hardy and, like all hydrangeas, prefers semi-shade.

The rare Iochroma fuchsoides is a fast growing shrub with soft hairy grey-green leaves and trusses of tubular salmon coloured flowers in summer and autumn. Evergreen and very hardy, it grows about 3m high and wants full sun.

An exotic option for those difficult very shady areas in the garden is the yellow jacobinia or Justicea aurea. This is an upright branched evergreen shrub with robust stems, huge mid-green leaves and sprays of tubular yellow flowers that attracts bees and butterflies in summer. Hardy to -6 degrees Celsius, it reaches a height of about 1m. Cut back hard in early spring.

Contrary to what its common name of Persian shield suggests, the tender soft-stemmed Strobilanthes dyerianus hails from Burma. This shrub has gorgeous thick quilted purple leaves with an iridescent silver overlay, and spikes of pale blue flowers in autumn. It grows about 1.2m high and is happy in shade to semi-shade. Not suitable for cold areas, it does make a good indoor plant.

Moving away from harmful pesticides and other gardening chemicals is virtually a given these days. I recently came across an eco-friendly website www.dirtdoctor.com which you may find of interest. It features all kinds of organic recipes using down-to-earth ingredients like baking soda, cornmeal, garlic and habenero peppers.

The City Nature Challenge (CNC) is a 4-day global bioblitz in which citizen scientists try to document as much of the biodiversity in their home cities as possible.  Observations of wildlife (animals, plants, fungi) are recorded (by taking a photo and noting the location) and then uploaded to the iNaturalist app. The species observed are then identified and this data becomes available to researchers and conservationists in their efforts to understand and protect our urban biodiversity. Anyone can take part in gathering observations from 30 April to 3 May, either on their own or through one of the many events being organised in various reserves and other venues. The uploaded observations will then be identified by the iNaturalist community from 4–9 May, and the results of the Challenge are announced on 10 May.

If the weather forecasts are to be believed, some very early winter weather is on its way. Don’t forget to save all those raked up leaves to help the plants through the chill – and happy gardening!

0 items in your basket