Zach Bush is an American medical doctor and global influencer who is advocating for soil health and regenerative agriculture. In this time of doom and gloom, Bush is passionately optimistic about our ability to turn around the damage done to the planet and advance human health and resilience against disease. He predicts a major turnaround in agricultural systems in the next 20 years as consumer demand for a return to healthy and sustainable food production grows.

At the level of us smaller-scale gardeners, in a recent podcast Bush spoke with his usual enthusiasm about the rise of first-time gardeners amidst all the fear and chaos of 2020. He compares this upsurge in gardening and urban farming to the WW II victory gardens of the 1940s, when millions of people in the allied countries planted up little plots with vegetables as a way of easing the burden on farmers and safeguarding against food shortages. Amazingly, by 1943, small home, school and community gardens were producing 40% of all the vegetables consumed in the US!

As the pandemic hit last year, American seed companies reported shortages as early as April as people rushed to take up vegetable gardening. Whether this was due to fears about food shortages or the boredom that came with lockdown, people started experiencing the satisfaction of raising plants from seed and growing their own food, even if it was just one tomato plant in a balcony container. In a newsletter towards the end of last year, I praised Checkers for the timely reintroduction of their Little Garden campaign. Perhaps more people took to raising their seedlings this time. What better way to boost morale and take back some control over your life!

As an aside, Zach Bush is no fan of formal garden landscaping. He urges us to replace manicured lawns and flowerbeds with “rampant biodiversity”; planting spinach among the roses, daisies among the tomatoes - and even viewing those weeds with a more tolerant eye. A new approach to weeds might require some mental reprogramming but fortunately the garden of a plant collector such as myself is already quite a “fruit salad”! Anyone else out there up to the challenge? This is as good a time as any to rethink the way the way we do things and make new choices that will contribute to a healthier planet through healthier soil and insect populations.

I don’t know about you, but we seemed to have an abnormal number and variety of caterpillars in the garden this summer. Preferring to let nature take its course as much as possible, I have avoided spraying and kept reminding myself that these creatures have an ecological role to play and aren’t ravenous worms for long. The result has of course been a rather “holey” garden!

With its cooling temperatures and the flowers that only come around at this time of the year, autumn is always a season to be savoured. 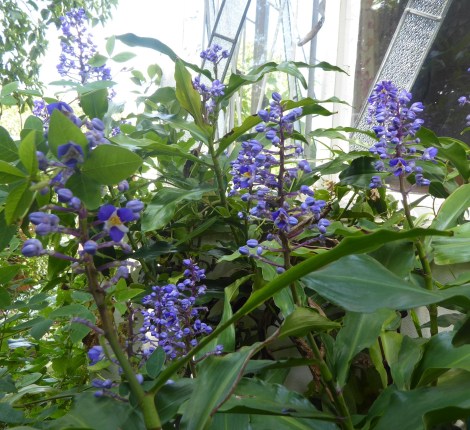 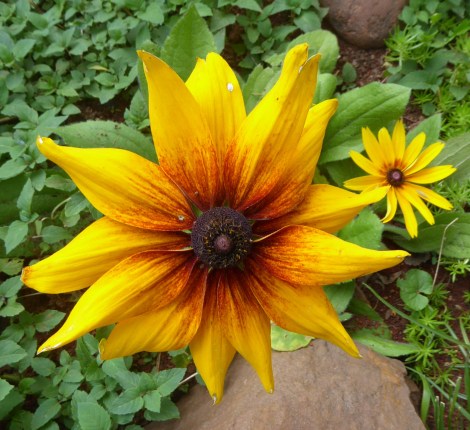 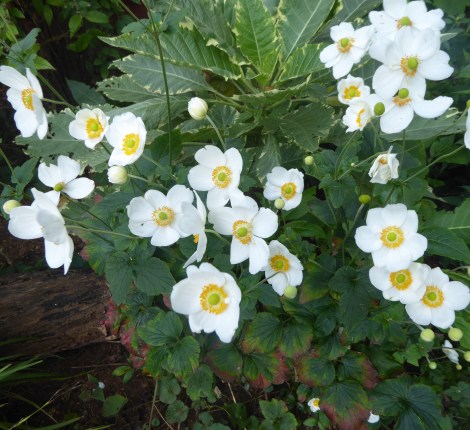 Rumours are that we are in for a very cold winter, so it might also be a good time to start making plans for protecting our plants through the coming months, especially in those regions that are prone to severe frost.

Aspilia mossambicensis is a lovely rounded medicinal perennial with narrow elliptical leaves and clusters of yellow flowers all season. Widespread in South Africa, it has done exceptionally well in my garden. Plant in full sun.

For those looking for some colour around a pond or some other form of water feature, Hesperantha coccinea is a good choice. This sun-loving deciduous clump forming bulb with long narrow leaves has bright red (and paler) star shaped flowers from summer to autumn. A hardy plant that grows on average 75cm high.

The bog plant Nymphoides thunbergiana is another one that might of interest to gardeners with a water feature. Also deciduous and sun-loving, this fast growing aquatic perennial has flat, rounded floating leaves and unusual dainty star-shaped yellow flowers with a feathery edge from summer to autumn. With a spread of 1.5m, it acts as a habitat for invertebrates and juvenile fish.

Salvias are such rewarding plants in any garden. Salvia African Sky is a 70cm high twiggy shrublet with small leathery grey-green leaves and spikes of light blue flowers from summer to autumn. An indigenous garden hybrid, it is evergreen and hardy and likes sun to semi-shade.

The tree tomato, Cyphomandra betacae, has become quite popular in recent years as an unusual addition to the vegetable garden. A single trunked approximately 2m high tree, it bears prolifically in the summer. The fruits are somewhat sweeter than regular tomatoes. It is evergreen and semi-hardy, and like its distant relations, wants full sun.

Phlomus fruticosa, also known as Jerusalem sage, is an upright Mediterranean shrub which likes full sun and dry sandy soil. Reaching an average height of 1.2m, it has lovely crinkled grey leaves and clusters of yellow flowers in summer. It is evergreen and hardy.

With the rather intimidating Latin name of Pseudogynoxys chenopodioides, the Mexican flame vine is a fast growing climber with soft lime green leaves and dazzling orange fragrant daisy-like flowers that attract bees and butterflies from summer to autumn. Growing to an average height of 3m, it lends itself well to a trellis or obelisk. It is evergreen and semi-hardy, and likes full sun.

Here's wishing everyone a blessed and peaceful Easter, and happy gardening!

0 items in your basket